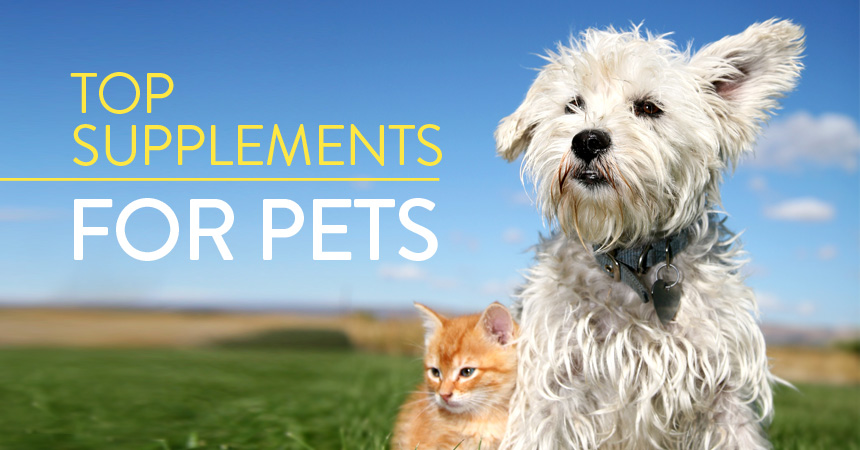 When hotelier Leona Helmsley died in 2007, she famously left the bulk of her $12 million estate to her beloved Maltese dog, Trouble. Although a judge later knocked down Trouble's inheritance to a mere $2 million, the pup didn't want for much. (She was chauffeured around New York City in a stretch limo.) We can't really know what Trouble or Trouble's handlers did with her money, but we feel pretty confident that some portion of it went to managing the dog's health and daily diet — and that probably included nutritional supplements.

Sound silly? It turns out that supplements for pets is an industry that does more than $1 billion of business every year. While some might find that crazy, it actually does make sense: Pets are prone to some of the same types of diseases and illnesses that affect humans, and preemptive nutritional strategies can help support their health. (Don't lie; we know a lot of you probably give supplements to your pets while not taking any yourself!) Let’s take a look at some of the top nutritional supplements for pets and analyze the human counterparts.

Like humans, dogs are prone to problems in their bones and joints. Large dogs, especially breeds such as Rottweilers, Shepherds, Retrievers, Mastiffs and others, can develop bone problems during their initial growth spurts that can become very serious as they age. Developmental defects in elbows and hips are especially common with a condition called “hip dysplasia” affecting many big dogs. Hip dysplasia occurs when the ball and socket of a joint do not grow at the same rate, causing these two essential architectural features not to fit well. The limp affecting a young or middle-aged dog can worsen to full lameness in the dog’s later years.

Regarding bone and joint problems with dogs, Maryland veterinarian Darryl L. Millis said, “It has become evident that we need to address the joint before it becomes clinically affected.”1 One strategy to address joint and bone health in dogs is through supplements.

Glucosamine and chondroitin are normal parts of cartilage that are also found on the covering of shellfish. Known as the supplement Cosequin, they have been given to pets to help relieve pain and add mobility to pets suffering from bone and joint illnesses, such as osteoarthritis. However, a 2017 review of the use of these ingredients for osteoarthritis in dogs concluded that the clinical benefit remains questionable.2  Similarly, studies on the effectiveness of Cosequin in humans have been inconclusive. But soybean and avocado extracts, often referred to as ASU (short for "avocado soybean unsaponifiables"), have shown some evidence of being effective in dogs and humans, and companies have packaged these extracts in easily ingestible pills.

Fatty acids and fish oil have long been among the top supplements for human consumption, as the side effects are low and there are wide-ranging benefits. The most important benefits are usually considered to be supporting the heart's health—these supplements can help lower blood pressure as well as triglyceride levels—but the benefits extend to maintaining joint health, and possibly helping with psoriasis and depression.

Dogs and cats also seem to benefit quite a bit from fatty acids and fish oil in supplemental form, and some of those benefits are the same as they are in humans. But fatty acids and fish oil have also been shown to dramatically improve pets’ coats! If your dog or cat’s coat has lost some of its shine, feels brittle or has lots of flakes, then fatty acids, especially Linoleic acid (an omega 6), may be just the thing to restore its shine.3

Heart and Energy: CoQ10 and Ubiquinol

CoQ10, which is produced naturally in the body and is available in supplement form, offers health benefits to cats and dogs that are very similar to the benefits it offers to humans. CoQ10 is essential for the mitochondrial synthesis of energy, acts as an antioxidant that promotes healthy aging in older adults, and supports the healthy functioning of large organs, especially the heart and liver.

CoQ10 comes in a few forms, but the recommended form for cats and dogs is ubiquinol. Ubiquinol is the reduced, active form of CoQ10, meaning it is already converted to the state that the body (including animal bodies) can use. Because ubiquinol isn't plentiful in food sources, humans can best get their recommended daily dose by taking Kaneka Ubiquinol supplements. For pets, a variety of ubiquinol products can be found, including an airless pump spray and liquid gel caps marketed specifically for pets.4

But humans who take Kaneka Ubiquinol can easily add it to their pets’ food, however, as with all supplements, consult with your veterinarian first. All you have to do is prick the liquid gel cap with a needle or cut off the top of the capsule and squeeze the oil onto your pet’s wet food. As long as it is ingested within one hour, the Kaneka Ubiquinol will still be active.

A Note of Caution

While Kaneka Ubiquinol generally reacts and functions the same in pets as it does in humans, that cannot be said for every supplement on the market. Pets are not humans, and the difference in their nutrient and dietary needs should be respected. Excess vitamins can harm dogs’ blood vessels and muscles. For example, too much calcium can (counterintuitively) harm dogs' bones. Be sure to check with a veterinarian before starting your pet on a regimen of supplements.

Pets are such a source of comfort and joy, and witnessing their pain is so difficult. Along with diet and exercise, nutritional supplements can help your pet live a long and vibrant life. And you don’t even need $12 million to do it.