Drop Your Cholesterol to Help Raise Your (Ahem) 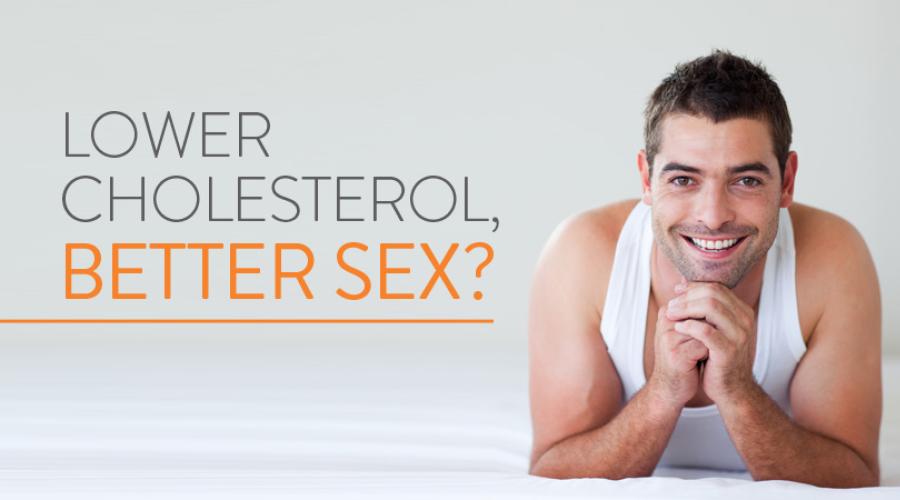 From penicillin to Coca-Cola, the history of scientific discovery is filled with mistakes and happy accidents. A particularly interesting accidental discovery is the one involving erectile dysfunction medication. Viagra, released in 1998, has become one of the top-selling drugs of all time. But did you know it was developed as a treatment for hypertension as well as the pain in the chest that results from heart and artery disease (otherwise known as “angina”)?

It’s true. Chemists working at Pfizer’s research facility in Kent, England, developed the synthetic compound. In initial clinical trials, researchers found that the drug did not profoundly affect angina, but it did cause penile erections. It also helped relieve pulmonary arterial hypertension and helped improve right-sided heart failure. Curiously, when dissolved in a vase of water, the drug can also extend the life of cut flowers and strengthen their stems. See? Sex, flowers and the heart really are linked.

What the early Viagra researchers were noticing when they saw improvements in pulmonary hypertension, right-sided heart failure and penile erections had to do with increased blood flow due to widened arteries and the relaxation of smooth muscle cells. Widening arteries is called vasodilation. Smooth muscle tissues and cells are similar in some parts of the lung, heart and penis, so Viagra’s relaxation of some of these tissues induced the widening of arteries selectively (meaning, it worked in these parts of the body without affecting other parts of the body).

With the above information and further research, researchers have found that erectile dysfunction and some forms of heart disease are linked in another way: They share a common cause.

Atherosclerosis refers to the loss of ability of the blood vessels to properly dilate, which is usually caused by the buildup of cholesterol, which in turn hardens into plaque. At an advanced stage, blood flow can be seriously impaired and/or a blood clot can form and produce a catastrophic, often fatal event called an infarction. A big problem with atherosclerosis is that it can go undetected for decades, leading some to call it and its symptoms “clinically silent.”

Erectile Dysfunction as an Early Sign of Heart Disease

In recent years, clinicians have started to believe that there may be a way of hearing the previously silent warning voice of atherosclerosis. Because the vessels in the penis are smaller than those in the heart, they harden earlier. Data shows that erectile dysfunction can precede a heart attack by as many as 3 to 5 years. Call it fair warning.1

Can Cholesterol Buildup Be Reversed?

While Viagra is used specifically to increase blood flow to the penis, it may not be effective in treating the underlying cause: atherosclerosis. For this, doctors use a couple strategies. The first and most important, of course, is making lifestyle changes. As John B. Kostis, MD, professor of medicine and director of the Cardiovascular Institute at Robert Wood Johnson Medical School in New Jersey put it, “Ultimately, a healthy lifestyle is the best method to prevent disease, including erectile dysfunction.” But Dr. Kostis goes on to explain that statin medications, which are intended to lower cholesterol, have also been shown to lessen the effects of erectile dysfunction in men.2

Statins are a class of drug that have been shown to be highly effective in the treatment of cardiovascular disease and are relied on by an enormous amount of men and women. Current estimates claim that 25 percent of all Americans over the age of 45 are on a statin drug, and the likelihood of being put on a statin only goes up as we age.3

This year, Dr. Kostis performed a meta-analysis (which means a study that aggregates data from other studies) of men who are part of the International Index of Erectile Function and who have been put on statins. Presumably, these men were put on statins in order to lower their cholesterol, not improve their erectile dysfunction. But Dr. Kostis found that lessened ED was an ancillary result of the statin medication.

It is not yet clear whether statin medication will be prescribed specifically to combat ED, but because of the link between erectile dysfunction and atherosclerosis, it may not be necessary to differentiate. What is clear is that statins will not be going away. Despite a very vocal contingent of statin critics, statin use around the world is on the rise. This is driven in part by modified statin guidelines in the U.S. which have lowered the threshold of who should be prescribed statins,4 meaning many millions more are now eligible for statin therapy (similarly modified guidelines were issued in the U.K.).

The takeaway is this: Erectile dysfunction is not something to be ashamed of. On the contrary, it is something to pay close attention to because it may be a cry for help from your heart. The earlier it is caught, the greater the chances of warding off heart disease and improving your sex life.

Sexual Health In Your 50s & Beyond

7 Ways for Grandparents and Grandchildren to Play Together