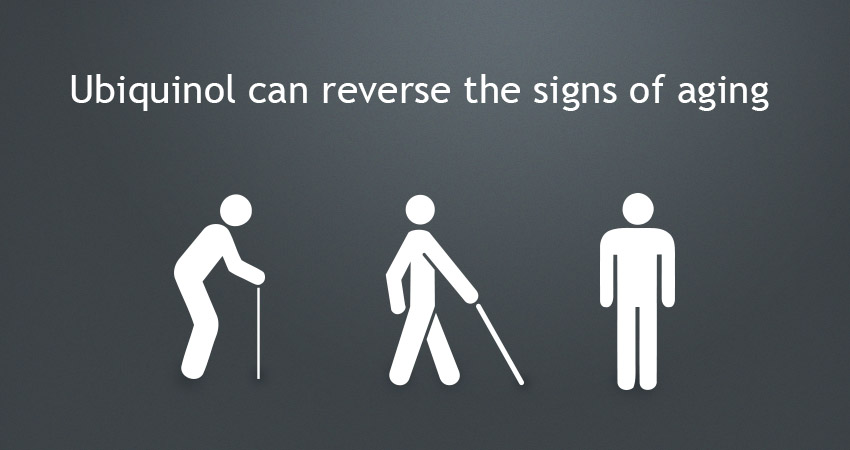 Many health professionals and clinical research scientists have been studying Ubiquinol and its antioxidant component to understand how it can reverse the aging process and many age-related conditions. This naturally-occurring nutrient is found in nearly every cell of our bodies and is responsible for cellular energy production. In order for the human body to reap the benefits of Ubiquinol as an anti-aging antioxidant, it must first convert the naturally produced ubiquinone form into Ubiquinol. As the strongest known lipid-soluble antioxidant, Ubiquinol can fight against the free radicals and oxidative stress that destroy cells. Both oxidative stress and free radicals are closely linked to the aging process and many age-related conditions.

If Ubiquinol is naturally occurring, why do I need a supplement?

As we age, our natural Ubiquinol levels slowly decline, leaving our cells unprotected from free radicals. Without Ubiquinol’s antioxidant properties, our cellular energy declines and the ability of the body to regenerate cells is compromised as well, until we become more susceptible to certain age-related conditions. Since we constantly burn energy, known as metabolism, we also produce free radicals as a by-product. Unfortunately, it is this by-product that ages us. With Ubiquinol as a supplement, the body receives not only additional assistance in cell production, but protection from free radicals.

What are the direct benefits of Ubiquinol?

The benefits of ubiquinol are numerous. Many people who take Ubiquinol supplements report increased stamina and energy. Since, as you age, your body can no longer produce the levels of ubiquinol it did when you were in your 20s and 30s, a Ubiquinol supplement helps to maintain the energy levels needed to support cardiovascular and neurological health and promote anti-aging. With increased cell energy production, it boosts the cardiovascular system and promotes proper blood circulation. Its antioxidant properties elevate weakened immune systems, so Ubiquinol can protect your body for optimal health.

How does Ubiquinol promote anti-aging in the skin?

Ubiquinol benefits for skin are derived from its ability to help rapidly regenrate cells and fight free radicals. Continued use of Ubiquinol can dramatically improve the look of your skin. Not only could you see improvement in wrinkles, but there is also added protection from external exposure to free radicals such as smoke, pollution, UV rays and other environmental sources. By neutralizing these free radicals with the help of other antioxidants like Vitamin C and E, Ubiquinol can help skin can appear smoother and healthier.

Oxidative stress is believed to contribute to the aging process, as well as to photoaging of the skin. Our chronological age is determined by our genetics, whereas photoaging is caused by exposure to UVA and UVB radiation. Oxidative stress can lead to a decrease in collagen. Add years of UVA and UVB exposure, amd the dermis is finally unable to support the elasticity of the skin. Ubiquinol’s antioxidant properties have also shown to protect skin from damage as a result of overexposure.

What other signs of aging can Ubiquinol reverse?

Besides helping you to feel more awake and alert, Ubiquinol can raise cell energy production and regeneration. With increased energy production, cardiovascular heart health is improved. As our society ages, it has come to the attention of health professionals that the cardiovascular system holds the key to the body’s entire aging process. Because of the accumulation of damage along the arterial walls of the heart, the thin layer of protective cells lining the walls cannot repair itself efficiently. Plaque forms more easily and continued wear and tear of the heart only leads to further damage.

In various clinical trials, subjects with a severe form of heart disease called congestive heart failure were given doses of 580 mg of Ubiquinol a day. The subjects' CoQ10 levels in the blood increased, and researchers found significant improvement in the ability of the subjects' hearts to pump blood to the rest of the body.

Are there any recent Ubiquinol studies?

A study performed in 2010 revealed that Ubiquinol had a very strong impact on the liver, heart, kidneys and brains of mice, slowing the degenerative processes in all organs. Numerous studies have also found that statin drugs, those drugs that reduce the “bad” cholesterol our bodies produce, lower our Ubiquinol levels. A Ubiquinol supplement can help the levels return to normal. With normal Ubiquinol levels in our system, the body can fight off damage from free radicals and oxidative stress – major contributors to early aging.

At-Home Yoga Workout
How To Learn More About Your Family’s Health History
Cuisine Of The Month: Italian
Low Impact vs High Impact Exercise