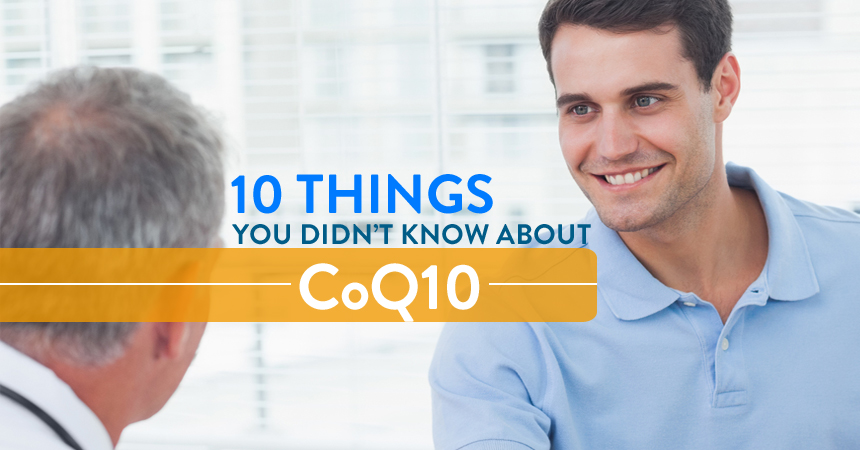 Since its introduction by Kaneka Nutrients in 2007, Ubiquinol has been on the rise as an alternative to conventional CoQ10 supplements. From featured segments on The Dr. Oz Show to its presence on a growing number of shelves in local pharmacies and grocery stores, it won’t be long until Ubiquinol is as much a household name as "fish oil" or "Omega-3." As the active, antioxidant form of Coenzyme Q10, it's easy to see why some scientists are calling Ubiquinol the "nutrient of the century."

Put simply, CoQ10 is like the fuel that drives the energy-producing action of the body's mitochondria. Ubiquinol is found in every cell of the body, and it is known to protect against oxidative stress (a prime result of—and possible catalyst for—the aging process). It also helps promote and maintain healthy levels of energy production. But how else does CoQ10 improve health, and how does Ubiquinol differ from conventional CoQ10 supplements? Here are 11 facts you may not know about CoQ10.

CoQ10 is produced naturally by the healthy body and exists in three ever-shifting states. The shift occurs when the molecule gains or loses electrons. The three forms of CoQ10 are:

2. Ubiquinol is the body's preferred form of CoQ10.

3. In a healthy adult, CoQ10 assumes the Ubiquinol form at least 95 percent of the time.

4. Ubiquinol is the only form of CoQ10 that exists as an antioxidant.

While Ubiquinol can serve similar functions to the other forms of CoQ10, Ubiquinol goes a step further. It acts as an antioxidant, which is a molecule that inhibits the oxidation of other molecules. While oxygen, of course, is a good thing, too much of it in the wrong places can result in cellular deterioration and cell death and can produce free radicals, which are unbalanced molecules that go around stealing electrons from healthy cells. Ubiquinol protects against this occurrence by "mopping up" free radicals.

5. Ubiquinol is the only known lipid-soluble antioxidant synthesized in the body.

Lipid solubility refers to the ability of a molecule to become absorbed by the protective, fatty structure found in organelles such as the mitochondria. While some vitamins, particularly Vitamins A and E, are also lipid soluble, Ubiquinol is more effective than either of these in fighting free radicals and in protecting against lipid peroxidation, which is a type of degradation that results in cell damage

From studies of patients with congestive heart failure to studies in a normally aging population, CoQ10 has been shown to support the robust health of the heart. In one study, the ejection fraction of the heart (the amount of blood the heart pumps with each beat) dramatically improved when the patients' systems were infused with Ubiquinol. Ubiquinol is more bioavailable than CoQ10—meaning it is easier for the body to absorb and use—because, unlike CoQ10, the body doesn’t have to convert Ubiquinol before using it. For individuals taking statins CoQ10 ubiquinol maybe reduced. Supplementing with Ubiquinol can restore those levels thus reducing the side effects of statins: https://ubiquinol.org/statin-drugs

7. Kaneka Nutrients has produced Ubiquinol that is bio-identical to the Ubiquinol found in the body.

The active, antioxidant form of Ubiquinol produced by Kaneka Nutrients and found in every Ubiquinol supplement is chemically the same—or bioidentical—to the nutrient produced naturally in the body. Because of Ubiquinol's unique absorption properties, it is ideal for aging populations. For anyone over the age of 40, and maybe even younger, Ubiquinol is the preferred supplement because the body has begun to lose its ability to convert CoQ10 from Ubiquinone into the active and usable form of Ubiquinol.

While CoQ10 has been available as a supplement for decades, Ubiquinol has only been available as an oral supplement since 2007. At 100 mg to 300 mg a day, Ubiquinol levels increased four-fold in healthy people, and when compared to conventional CoQ10 supplements (Ubiquinone), the same amount of Ubiquinol resulted in higher levels of CoQ10 in the body. Also of note to healthy populations, there is little to no risk of taking too much Ubiquinol.

9. CoQ10 and Ubiquinol side effects are minimal, according to some studies

In some studies, the only negative CoQ10 side effect of an extremely high daily dose of 3,600 mg was some gastrointestinal discomfort.

10. The name Ubiquinol comes from the word "ubiquitous."

The name Ubiquinol comes from the words "ubiquity" or "ubiquitous," both of which derive from the Greek term for "being everywhere at once." That's because Ubiquinol is everywhere in your body. Literally. Ubiquinol is found in every single cell in the human body. In fact, it's in nearly every cell, tissue and organ in mammals. Soon, Ubiquinol may be as ubiquitous as multivitamins in Americans' daily health regimens.

11. CoQ10 and Ubiquinol research is ongoing.

The extent of the benefits of CoQ10 and Ubiquinol is still being studied. Just how important CoQ10 is to heart failure patients has yet to be determined, and recent research has pointed to CoQ10 playing an important role in bone health, statin therapy regimens, and in the work of the lungs and the liver.

Ubiquinol & Statins: The Nutritional Benefit of Combining Them
Read Article

How To Talk To Your Doctor About Heart Health
Read Article

Tips For Healthy Living In Your 60s
Alzheimer’s Disease: When Is Forgetfulness More Than Forgetfulness?
Cuisine of the Month: Thai
At-home HiiT Circut