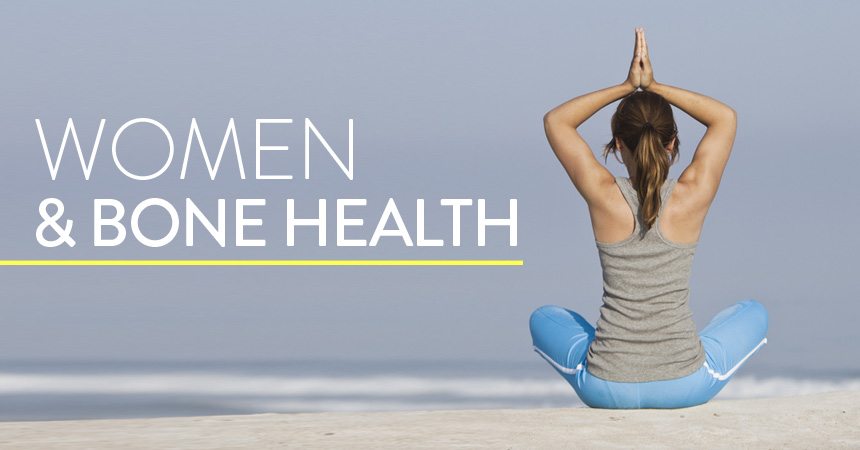 “It can't be said often enough, ‘It is the woman who pays.’”

That is a line the late, great Kurt Vonnegut wrote to a grieving widow after she sent a fan letter to the author in 1990. Truer words, right ladies? While it's probably safe to assume Vonnegut wasn't considering bone health when he wrote that line, his words of wisdom apply there, too. It is an unfair but irrefutable fact that life exacts a greater toll on women’s bones than it does on men’s. A brief overview:

The Glory of Bones

Let’s take a moment to revel in the glory of our bones. Bones are extraordinarily strong and hard, yet light enough for us to move around day after day. They are often compared to bits of machinery, much like bicycle frames or the frames of houses, but this is far too incomplete an analogy. Bones are composed of minerals, tissues, living cells and proteins, and they are specifically evolved to suit highly differentiated needs. Bones actually produce red and white blood cells, actively store minerals for later use, and fuse together as the needs of life change. If house-building materials could do this, we’d be living like fishes in houses made of coral. Did you know that approximately 10 percent of the adult human skeleton “remodels” itself every single year?1 If only our houses could do that!

Indeed, coral is a far more fitting analogy to the complex and living biology of the bone. And like coral, bones are susceptible to environmental degradation and breakage, but are also able to be fortified and strengthened and are resilient enough to withstand repair.

While much of the medical literature focuses on women at an advancing age (we will get there, too), it is important to know that bone degradation is not simply a matter of fate. Aside from rare cases of inexplicable low bone density in young women, most bone problems—including a condition called “secondary osteoporosis”—have a known root cause.

Calcium and Vitamin D: Calcium and Vitamin D are critical components of bone health. Deficiencies due to poor diet should be monitored. Women with eating disorders likely do not get enough of these nutrients and are therefore at an exaggerated risk of painful and debilitating fracture. Because most calcium comes from dairy products, lactose-intolerant women may need supplemental calcium to keep their bones healthy and strong. And most Vitamin D comes from the sun, which we're told daily to avoid when, really, a few minutes in the sun sans SPF can significantly boost our Vitamin D levels.

Pregnancy and Breastfeeding: Bone health may not be the first thing on the mind of the pregnant or breastfeeding woman, but the great process of life-giving demands a lot. Growing babies take everything they need from their mothers, including calcium and Vitamin D, so if a young mother starts her pregnancy or her weaning with low calcium and Vitamin D, her baby will take her precious reserves. The good news here is that bone density lost to pregnancy and breastfeeding—about 10 percent—is fully regained in time.2 Also, pregnant women tend to naturally do a couple things better than non-pregnant women: They produce more estrogen, which protects their and their babies’ bones, and they are better at absorbing calcium from food and supplements. There is even a theory that pregnancy is actively good for bones and may help prevent osteoporosis in later life, but research into the highly complex variables regarding this claim is ongoing.3

Osteoporosis and the Aging Woman

The word osteoporosis is derived from the Greek: “osteo” for “bone” and “poros” for “pore” or “passage.” Osteoporosis, therefore, is usually taken to mean “porous bones,” but let’s play with the definition and say that osteoporosis also reflects the passage of time. Researchers are not exactly sure what causes osteoporosis in women, but we know it has something to do with estrogen. (Testosterone deficiencies in men have been linked to osteoporosis but, alas, men continue to produce testosterone more than women produce estrogen.) As women age, estrogen levels drop, and bone density decreases. This process accelerates after menopause. It is estimated that some women can lose as much as 20 percent of bone density within five years of going through menopause.

What Can Be Done

Because bone density drops when the body stops producing estrogen, either during natural aging or because a baby is taking so many resources from a woman, the best defense against osteoporosis and related bone health issues is prevention. The denser the bone, the greater amount a woman can lose without compromising her health and safety.

Calcium and Vitamin D are essential, as stated above, as are exercise and diet for building muscle mass and strong bones. However, newer research has shown a link between antioxidants (including CoQ10 and Kaneka Ubiquinol) and bone health. Remember the statement above that the adult skeleton is constantly remodeling itself? That process is technically called resorption, and a recent article in the Journal of Food Science showed that CoQ10 is responsible for regulating it.4

Bone density screenings are also available. All peri- and post-menopausal women should have regular bone density checks to track the speed at which bones are losing density so that supplemental and exercise therapy can be more specifically targeted. Younger women are not advised to undergo bone density tests, unless fractures or other symptoms have pointed to a legitimate problem.

What’s Missing From Your Diet?
Veggie Of The Month: Eggplant
Can I Get Ubiquinol From the Foods I Eat?
Telehealth: What You Need To Know About Virtual Doctor’s Visits