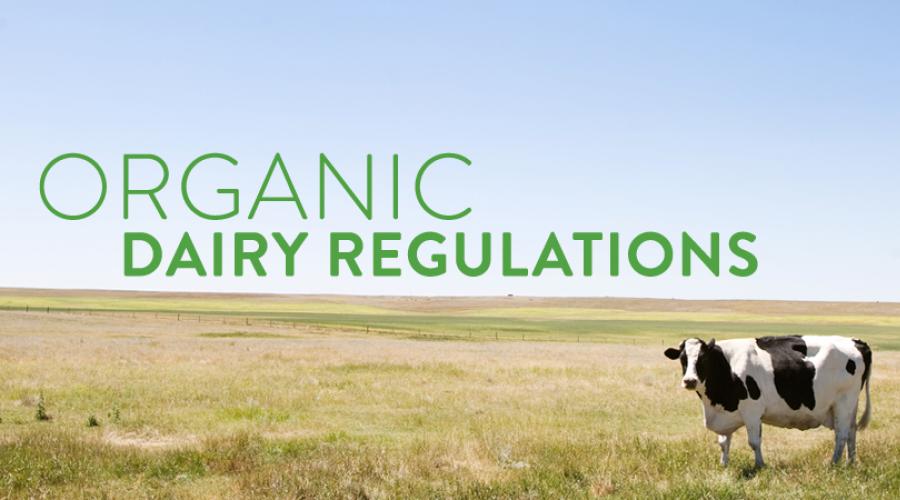 Today more than ever before, people are concerned about the safety and integrity of their food – where it comes from and what goes into it – and the same is true of dairy products. Many people have a basic understanding of what organic produce means: no chemicals and no pesticides. But what are the regulations for organic dairy? We know cows make milk, but do you know what makes cows “organic?”

U.S. Dept. of Agriculture regulations for organic dairy farms dictate everything from grazing time to permitted medical treatments, and they specifically require that cows must spend at least four months a year grazing in pastures.1 The USDA tightened regulations in 2010; prior to that, organic dairy regulations required cows eat feed that was free of chemical fertilizers, pesticides and genetically modified seeds and had no added hormones or antibiotics. Now, in addition to an Organic Livestock Plan, organic dairy farmers must prove:

Making the move from conventional to organic dairy farming takes at least three years. First, the soil of the pastures where the cows graze must not have any chemicals applied to it for at least two years. Then the cows must graze on the organic pastureland for a year prior to the milk they produce becoming suitable for labeling as “organic.”

You Are What You Eat…Eats

Cows on conventional dairy farms often eat a diet of corn and soy. Organic regulations result in cows eating more of their natural food: grass. The difference in diet affects the makeup of the cows’ milk.

The Composition of Milk

Whole milk consists of water (88 percent), fat (3.3 percent), protein (3.9 percent), carbohydrate (4.8 percent), plus small amounts of many other nutrients.2  However, measuring milk nutrition comes down to the amount of protein and fatty acids in the milk. According to a University of Washington study, of the 3.3 percent fat in whole milk, 3.1 percent is fatty acids.

“Antibiotic-free” labels can be a bit misleading. The FDA (U.S. Food and Drug Administration) imposes strict antibiotic testing requirements: Every tanker of milk, organic or conventional, is tested for the presence of antibiotics. If antibiotics show in the results, the milk is dumped.

The biggest difference is that organic milk comes from cows never treated with antibiotics, whereas conventional milk may come from cows that were treated at one time but have been off the medications long enough so that there is no antibiotic residue in their milk.

Cows are ruminants and have four stomach compartments (the rumen, reticulum, omasum and abomasum), which enable digestion of highly fibrous materials, such as grass. But grains, such as corn, are too rich and starchy for cows' digestive systems. A grain-based diet results in a host of digestive problems, including bloat, acidosis (severe cow heartburn), ulceration and abscesses of the rumen.

Manure, a by-product of all that feedlot feed, exacerbates their problems. Cows in feedlots spend most of their time standing or lying in their own feces. So, beyond digestive ailments, cows are also prone to:

The conventional treatment of choice for all these ailments is antibiotics.

Organic dairy farming practices aim to avoid the conditions that cause illnesses in the first place. They live mostly on grass and spend much more time out in pastures. Should a cow become ill, organic farmers use natural and homeopathic remedies.

Federal regulations require organic dairy farmers to provide medical treatment, including antibiotics, when the cow requires it. Withholding treatment is not only cruel, but also breaks the law. However, if a cow receives antibiotic treatment, it can never return to organic status. This contrasts with conventional practices, under which a treated cow’s milk is allowed once it tests free of antibiotics.

Organics in the Real World

While similarities exist, organic dairies differ from conventional ones in many ways:

A University of Minnesota report, 2010 Organic Farm Performance in Minnesota, revealed that “organic dairy herds in Minnesota during 2010 had more net income per cow (+$544) than non-organic herds.”6 This took into account that organic herds had lower feed costs because they ate more grass and less grain as well as having lower veterinary costs.

Whether your motivation is improving the environment, bettering the living conditions of farm animals or simply getting the optimum health benefits from your foods, organic regulations ensure that the organic dairy products you purchase are all they claim to be.

How to Eat Healthy This Winter

What Do Your Food Cravings Really Mean?