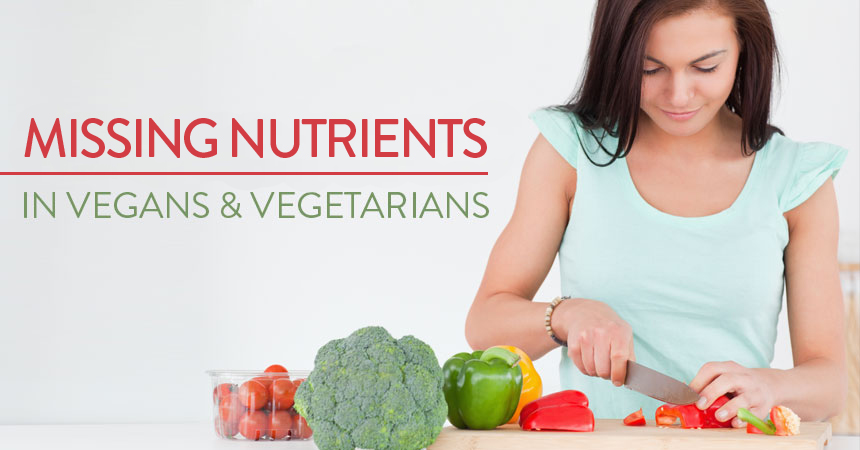 There are many reasons people make the choice to eliminate animal products from their diet - whether ethical, spiritual or political. Some have made the choice because they believe it to be best for their health. The Plant-Based diet, which is the latest trend in nutrition advice, promotes a plant-centered approach, with a diet rich in vegetables, fruits, nuts, seeds, whole grains and legumes. A true plant-based diet does not necessarily exclude meat and dairy, but animal products are not the focus. Some go one step further and remove both animal and dairy products entirely, becoming vegetarian or vegan.

Current statistics show that 8 percent of Americans consider themselves to be vegetarian, while 6 percent consider themselves to be vegan; that works out to roughly 45 million people.1 However, it is wise to be aware that even though there are some benefits to this way of eating, there is also danger of nutritional deficiency over time if proper supplementation is not implemented. So what essential vitamins and nutrients may be lacking in vegan and vegetarian diets?

Arguably the most important deficiency for vegans to be aware of and to avoid is Vitamin B12 (Cobalamin). Of all of the vitamins, B12 has the largest and most complex structure. Its roles include cellular metabolism (including DNA synthesis), blood formation, and regulation of nervous system functions. It is found in meat, dairy, seafood, eggs, and fortified foods, like cereal. But unlike most other vitamins, B12 is not found in any plant. This means vegetarians that do consume eggs and dairy, called ovo-lacto vegetarians, have a dietary source, while vegans do not. In any case, both should supplement because the reliance on dietary B12 from eggs and dairy is likely insufficient.2

Vitamin B12 deficiencies have been linked to a variety of nervous system disorders, from depression and fatigue to irreversible brain damage resulting in memory loss and mania, particularly in older adults. New research is exploring a suspected link between low B12 levels and Alzheimer’s disease.3 Vitamin B12 also helps prevent megaloblastic anemia, which induces fatigue and weakness.

It is important to ask your healthcare provider to test your B12 levels when you have your annual bloodwork drawn. B12 is readily available in supplement form, either on its own or as a multi-vitamin combined with other nutrients. The recommended daily intake for an adult is 2.4 micrograms.4

Vitamin D is another nutrient that is often missing in vegan and vegetarian diets. Vitamin D's interaction with calcium is essential for bone health, which makes it particularly important for aging people. Food sources include meat, fatty fish, dairy and egg yolks. Many food items, such as cereals, yogurt and milk are also fortified with Vitamin D.

Another great source? The rays of the sun, which is good news for those who don't consume meat; they can still get it from a natural source. The skin has the amazing ability to produce Vitamin D when exposed to the sun. Some experts and researchers generally recommend 5 to 30 minutes of sun exposure on bare skin daily, or at least twice per week, between 10am and 4pm.

Depending on one’s ability to spend adequate time in the sun and intake of Vitamin D rich foods, it is likely that supplementation with Vitamin D will be necessary. For general nutrition advice, the recommended daily intake level established by Food and Drug Administration (FDA) regulations is 20mcg or 800 international units (IU) for adults and children aged 4 and older.

It is also important to consider that nutrients quite often work together to provide critical reactions in our bodies. Vitamin K works in conjunction with vitamin D to aid in calcium absorption, keeping our bones and heart healthy. For vegetarians, the best food source is natto, or fermented soybeans. Most vegetarians aren’t eating those daily - so a supplement is likely the best source. There is a growing body of evidence that supports the need for supplemental vitamin K. The recommended daily intake amount for general nutrition advice is 120mcg for adults and children over 4. The Food and Nutrition Board at the Institute of Medicine considers 90mcg as an adequate intake level for women.5

The importance of a protein-rich diet cannot be overstated, and some sources believe protein should make up at least 30 percent of your daily caloric intake. Protein is instrumental in maintaining mass (both muscle and bone), keeping energy levels up and keeping the immune system strong. The issue for vegetarians is that protein is most easily ingested through meat, poultry and fish.

A complete protein is one that contains all nine essential amino acids. Something termed “essential” means that the body doesn’t have the ability to produce it internally so it must be obtained through diet and supplementation. A common myth that has recently been debunked is that vegans need to “combine” proteins at every meal to create these complete proteins. In actuality, the liver stores the amino acids and with a varied diet, there is really no need to worry too much about this. The combination of foods we eat throughout the day is sufficient.6 Typical vegan and vegetarian sources of protein are beans, peas, legumes, nuts, whole grains and soy (tempeh, miso, tofu and edamame).

Another option is to occasionally incorporate a plant-based protein shake. Look for ones that are organic, whole food-based, and 3rd-party tested for heavy metals. There are also many meat alternatives on the market, but always read labels; the majority are highly processed.

But what if you are allergic or sensitive to the gluten found in many grains? Have some quinoa — a tasty superfood that is also considered a “complete protein” because it contains all of the essential amino acids as well as 8 grams of protein per cup! Amaranth and buckwheat are also great, hearty gluten-free grains. There are so many great blogs devoted to vegan and vegetarian nutrition & cooking. Take a look - and have fun cooking up protein-packed recipes like these overnight oats from “Oh She Glows.”7

Iron is a critical component in red blood cells. It aids in oxygen transport (to the lungs and muscles), energy production and hormone production. Deficiency may not always produce visible symptoms but can affect the immune system, energy levels and cognitive function. There are two main forms of iron, both of which are necessary and only one of which is available in plants. Iron is plentiful in dark leafy greens, legumes, sweet potatoes and fortified whole grains. Vitamin C helps the body absorb the iron found in foods. So generally speaking, supplementation with extra iron isn’t necessary as long as the diet contains enough Vitamin C along with these foods. You might also consider cooking in cast iron!

For general nutrition advice, the recommended daily intake for adults and children aged 4 and older is 18 mg/day. For women aged 19-50, 18mg/day of iron is especially important to support them through the reproductive years.8 The Food and Nutrition Board has established more detailed guidance based on age and gender as follows: for women over 50 and adult men, the adequate intake level of iron is 8mg per day.

Creatine is an amino acid that supplies energy to cells and increases ATP, the producer of our cells’ energy. It is well-known in the world of strength training, both for its ability to aid in building muscle mass and its effects on maintaining energy levels. While creatine is produced naturally in the body, it is also found in red meat and fish. The body generally produces about half of what a typical person needs in a day and the rest comes from the diet. Vegetarians and very physically active people might want to consider creatine as a supplement. It also needs to be considered as we age, along with exercise, to help with physical strength and stamina, recovery time and maintaining lean muscle mass. Studies have even shown benefits to cognitive function and cardiovascular health among many other conditions.9 Creatine is very safe - it is one of the most studied substances and one of the top-selling muscle-building supplements worldwide. There are vegan sources available online

Whatever reason you choose to become a vegan or vegetarian, the above nutrients should be monitored. Our ancestors were omnivores, surviving on whatever they could successfully metabolize, and our bodies’ needs developed accordingly. Many vegetarians and vegans say their diets are the "next step in evolution," but our bodies aren't quite there yet and still need many vitamins and nutrients that can't be found in strictly plant-based diets. If this is you, be sure to eat a wide variety of plant foods, have bloodwork done annually to determine what supplements you may need, and most importantly, listen to your body!