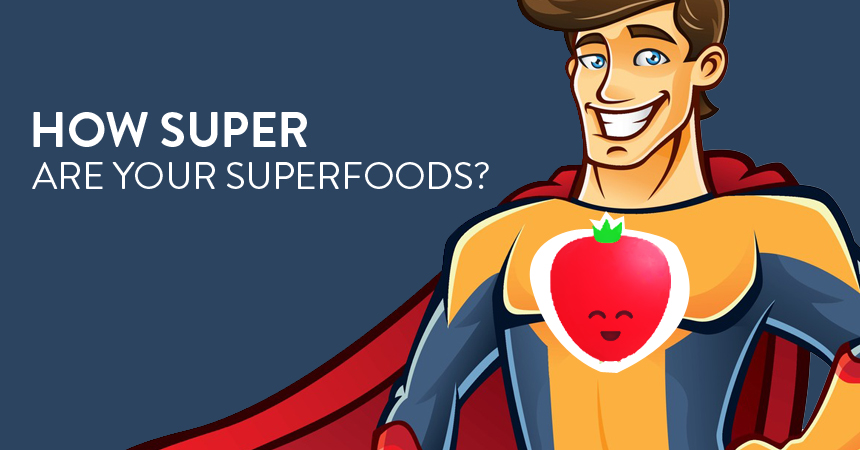 Way back when we were hunters and gatherers, we got most of our daily calories from nuts and berries, and on those rare occasions when an edible kill was made, we gorged. We also lacked proper preservative techniques like refrigeration, so gorging wasn’t about gluttony as much as it was about trying to get all the fat and protein we could before it went bad.

Now, of course, we’ve got all the meat and lard our ancestors were so hungry for. But many of us haven’t stopped gorging.

So we join Jenny Craig and Weight Watchers and gyms, and we try not to grab an extra cookie or that plate of fries at the burger joint. These efforts are worthwhile, and we should celebrate when our willpower defeats our evolutionary appetite.

But what’s less talked about is what we’re missing: specifically, the vitamins, nutrients and antioxidants that are either absent from our diets or unavailable in sufficient quantities. This is where "superfoods" come in.

A superfood is a food that is packed with health benefits that typical Western diets are lacking. Well, that’s as close as we can come to a definition because, really, “superfood” is a marketing term. Make no mistake about it. It’s catchy. It sounds like something Superman might eat. It caught the public imagination some years back and has been used as a handy promotional tool ever since. There has, predictably, been a backlash against it. It seems that for every nutritional blog mentioning the term, there is another one attacking it. In the extraordinarily protective halls of European health, the term now has legal status. According to European Union legislation, any mention of superfood must be accompanied by a "specific authorised health claim that explains to consumers why the product is good for their health."1

While it’s always good to understand marketing objectives and proper science, might the backlash be a bit beside the point? The truth is most of us are deficient in our vitamin, mineral and antioxidant intake, and some fruits, vegetables and supplements that have been passed over by our fat-and-protein-happy culture do offer real benefits that help with everything from digestion to heart health to brain function.

So here’s a short but helpful guide on how you can begin to oomph up your diet with some overlooked superfoods.

The above list is just a starter kit of possible superfoods. You’ve got breakfast, lunch, dinner, snack options and even a dessert (cocoa). These and plenty of other superfoods can go a long way toward promoting your heart health, providing antioxidant support and helping to prevent or manage diabetes.

Call them what you will — superfoods, the good stuff, nature’s bounty — so long as you add them to your diet. We Westerners are correct to place so much emphasis on avoidance in our diets, but we must also think about what we’ve been missing and need to add back in.

Demystifying Food Facts
Veggie Of The Month: Pumpkin
Why Do People Take Ubiquinol With Statins?
Guide To Health Screenings At Every Age