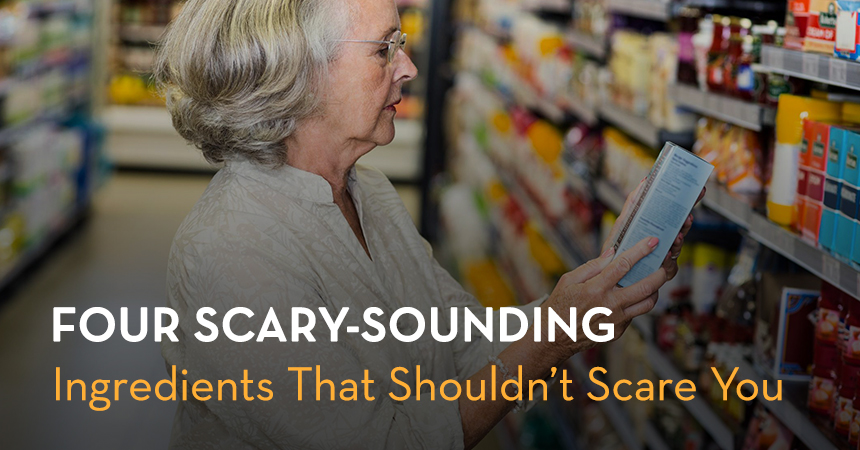 A few years ago, a chemistry teacher in Australia wrote a blog post called All-Natural Banana that went viral.

His article raised a very good point about how many of the natural ingredients found in wholesome foods can be made to sound scary or “synthetic” simply by referring to an ingredient by its scientific name.

I thought it would be interesting to list the official names of some ingredients commonly found in dietary supplements and other food products.

These safe ingredients, if called by their more scientific names, can suddenly sound scary (when there’s no reason to worry).

You know this scary-sounding ingredient by its more common name: vegetable oil.

Supplement companies often use the oil from sunflowers, soybeans and rapeseed (canola), or medium-chain triglycerides from coconut oil, to mix together or enhance the body’s ability to absorb a particular nutrient.

You might need a degree in chemistry to pronounce some of those words, but they shouldn’t scare you. This complex mixture is often called by a simpler name: lecithin.

Most lecithin comes from soybeans, but concerns about allergies and genetic modification have caused some companies to use lecithin from sunflowers or rapeseeds.

Lecithin is common in dietary supplements, breads, chocolates and countless other popular foods. Among other things, adding it helps naturally stabilize a mixture of different ingredients so the final product looks good and stays fresh.

Mixture of hydrocarbons and fatty acid esters of aliphatic alcohols

Believe it or not, there are even more technical names for this important ingredient that’s usually just called beeswax.

When called by their more scientific names, safe ingredients can suddenly sound scary when there's no reason to worry.

You might hear “hydrocarbons” and think “gasoline”. Chemically-speaking, the word just means that something has only hydrogen and carbon atoms.

Food companies often use small amounts of beeswax as a suspending agent or thickener in a mixture. Dietary supplement manufacturers use beeswax to prevent powder crystals from settling before they’re put inside soft gels or capsules.

Denatured sounds bad; why would someone remove nature?! In fact, this is just a really scientific name for a very safe and popular ingredient called gelatin.

Gelatin is mostly protein. Denaturing a protein basically means untangling it the way you might unroll a ball of yarn.

This structural change is what makes gelatin bind together the ingredients in a marshmallow or to keep apple juice clear in a bottle. It’s also a common ingredient in the outer shells of many popular dietary supplements.

Don’t Be Misled by Scientific Names

By now, I hope I’ve helped you see that chemical names are seldom indicative of safety. In some cases, they can be intentionally manipulated to mislead the general public into thinking something is dangerous.

"Chemical names are seldom indicative of safety. In some cases, they can be intentionally manipulated to mislead the general public into thinking something is dangerous."

The four ingredients highlighted in this article are Generally Recognized as Safe (GRAS) by the U.S. Food and Drug Administration. You’ll find them, by one name or another, in many of the foods and supplements you enjoy.

How to Thrive (Not Just Survive) in Midlife: Part 2 - Stop the Stress
Stress And Sleep
Cuisine Of The Month: American
Building A Nighttime Routine