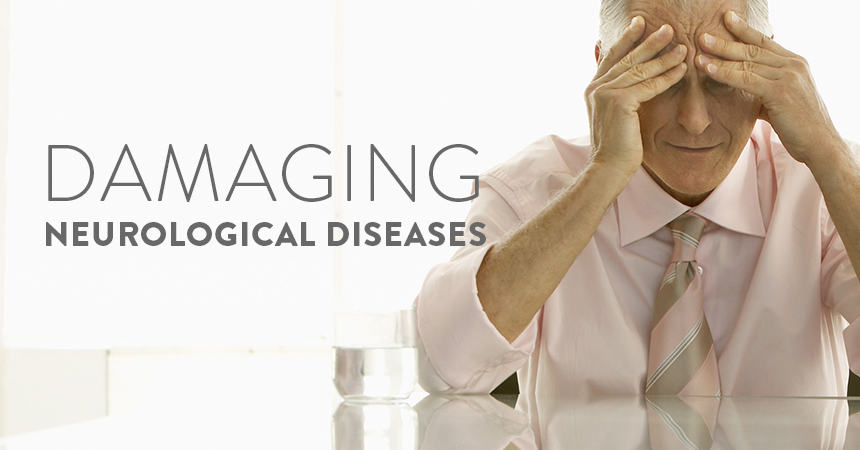 Sobering exercise: peruse the list of neurological disorders as defined by the Diagnostic and Statistical Manual of Mental Disorders (DSM), published by the American Psychiatric Association.

So much can go so wrong with our precious brains. And aging is not our side. Most people reading this blog will have firsthand experience of at least one of the more than 600 neurological diseases and disorders currently identified and described, which cover the spectrum from the strange and rare—like “fugue state”—to the all-too-common scourges of Alzheimer’s, ALA, and Huntington’s Disease.

What we all want is a cure, of course. But the brain is highly complex and so too are the things that can go wrong with it. Research into treating Alzheimer’s with pharmaceuticals, for example, has become a kind of holy grail in the medical industry, but the goal has been proving elusive. Just a couple months ago, the Swiss drug maker Roche discontinued a trial of an Alzheimer’s drug many had eagerly anticipated. The trial was discontinued due to low efficacy.1 Roche has vowed to continue investigating, as it should.

Alzheimer’s Disease is one of the most severe and definitely the most widespread of neurological diseases, accounting for 60%-70% of dementia cases worldwide, or around 30 million people over the age of 65. It typically begins with short term memory loss and proceeds to rob a person of language skills and bodily processes. It is often the latter that becomes the cause of death. (Please note: short term memory loss does not in any way equal the onset of Alzheimer’s.)

As the researchers at Roche discovered firsthand, the cause and therefore the treatment of Alzheimer’s is very difficult to pin down. It is currently considered to be mostly genetic, but other risk factors are seemingly important, especially a history of head injuries. A huge number of hypotheses exist regarding just what genes or combination of factors create the conditions for Alzheimer’s, but for now none are considered conclusive.

Lou Gherig was, of course, one of the greatest baseball players of all time. His career and life was cut short by what was then a little known disease. The disease, colloquially known as Lou Gherig’s Disease and medically known as amyotrophic lateral sclerosis (ALS), was actually described as early as the 1820s and is currently considered to affect around 1.5-2.5 people per 100,000.

Lou Gherig suffered from early onset ALS, which is very rare. The vast majority of ALS cases begin around the age of 60. Earlier reports that the disease favors men are now in doubt, and the cause of the disease remains basically mysterious. Around 10% of cases are known to be genetic, but the rest is unknown. What is known is that the disease causes the death of neurons and leads to muscle wasting but preserved sensory perception and, in most cases, memory. As with Alzheimer’s, there is no known cure, though riluzole may prolong life by a matter of months.

The great folk singer Woody Guthrie, author of “This Land Is Your Land” among many others, started acting strange toward the end of the 1940s, when he was in his 40s. His gait became unsteady and his behavior erratic. Woody remembered his mother acting that way before her own death. It turns out Woody was suffering from Huntington’s Disease,2 a genetic and hereditary disorder that would also kill two of Woody’s children, both at the ages of 41.

Huntington’s Disease is purely genetic, and its late onset (typically after childbearing years) means its transmission is usually unimpeded. There is no cure for the disease, but counseling, physical therapy, and some drugs—including Tetrabenazine, introduced in 2008—have been shown to alleviate symptoms.

The above three diseases are just a sampling of the most prevalent neurological problems. Others—including Parkinson’s and infections like meningitis—are similar in that the suffering is extreme and the prognosis is not good. So is there anything we can do while the researchers toil and the assisted care living centers fill?

A Cardiovascular and Social Link?

Part of the process of learning about diseases is to scour the data and look for links or patterns. Using data from the Framingham Heart Study, researchers at the Vanderbilt Memory and Alzheimer’s Center made a surprising discovery: memory loss seems to be predicated by two or three times on decreased heart function. Translation: subjects studied that had poor heart function were at double or triple the risk of developing memory loss and Alzheimer’s. According to the study’s authors, this should be a cause for hope. As is often pointed out, heart disease is “modifiable,” meaning our actions can help our outcome. If heart disease, then, in some way contributes to the development of Alzheimer’s, perhaps Alzheimer’s is in some way modifiable.2

Another Alzheimer’s study, this one out of the Karolinska Institute of Sweden, placed some Alzheimer’s patients on a diet and exercise regime, and continued conventional treatment with others. In what is being called a “breakthrough,” the study’s results showed major benefits for those who undertook the lifestyle change. The lifestyle patients scored particularly well, according to the study, in areas related to dementia.3

A plethora of other studies have found links to the improvement in neurological diseases in patients whose minds are active socially and intellectually. Regular conversations with family and friends and intellectual engagement in mind games such as chess seem to help prevent and alleviate symptoms of these diseases of the brain.

Philosophers are fond of distinguishing between the terms “mind” and “brain.” The brain is the organ full of cells and synapses. The mind is the ineluctable thing where our thoughts and motivations reside. The burgeoning field of neuroscience—and the medical fields studying neurological disorders—may be finding that the two are linked.