Caffeine: The Good, The Bad, The Alternatives 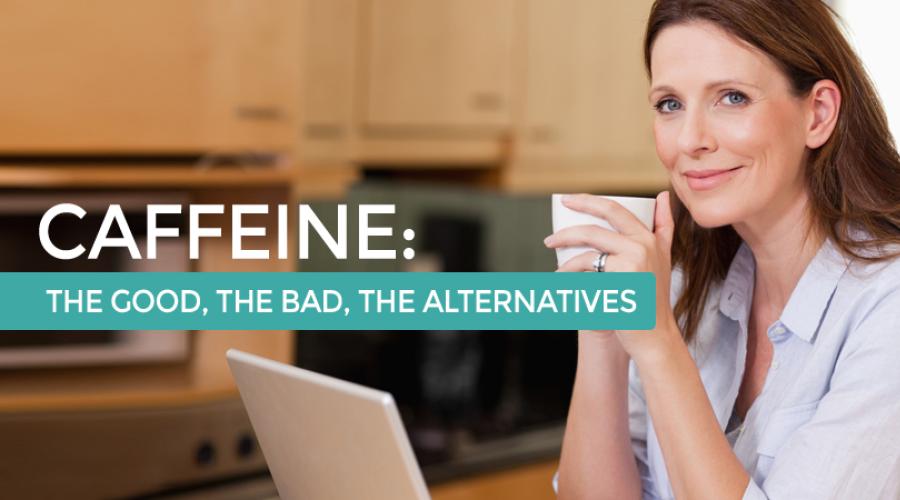 Chances are, you have knowingly or unknowingly given your body a jolt of caffeine today. Maybe it was a cup of coffee in the morning or a bite of chocolate in the afternoon. Maybe it was an oral supplement or an energy drink. According to the National Coffee Association, nearly 90 percent of Americans drink coffee daily. Non-coffee sources, which include tea, energy drinks and oral supplements, make up a rising percentage of total caffeine consumption.

Whether you are a moderate, informed caffeine user or a self-proclaimed "caffeine freak," we could all benefit from a mindful approach to this daily ritual. So, pour yourself a cup of joe or hot tea or grab that handful of guarana berries, and let’s consider caffeine: what it is, how it works, how we can use it and what are some alternatives for healthy, natural energy boosts.

Here’s a mouthful: Caffeine is a highly bioavailable psychoactive alkaloid that works directly on the central nervous system. (Fun exercise: Try ordering that at Starbucks.) In simpler terms, caffeine is a chemical compound that the body absorbs very well. It naturally occurs as a fine white powder that acts as an insecticide in certain plants, like the cocoa and coffee plants, and it is incredibly potent. The primary short-term physiological effect of caffeine is to stimulate the brain and spinal cord, which it does quite quickly. It’s not just a cultural custom that leads a majority of Americans to drink coffee in the morning; it actually—chemically—helps wake up the body.

But what about long-term effects?

Some studies show that caffeine produces beneficial responses in the body: The metabolic rate is increased, and thought is quickened and clarified. Caffeine can also improve endurance and sport performance. The health benefits of caffeine include reduced risk of diabetes and cardiovascular disease.

So why do we hear so many voices trying to discourage our caffeine consumption? Well, let's take a look at the dark side.

The greatest risk of caffeine consumption is sleep deprivation, and the list of problems associated with sleep deprivation—including cardiovascular disease and brain function—is very long and very well-researched. We should all carefully and realistically consider the time of day we consume caffeine. In addition, we should pay attention to how responsive our bodies are to this stimulant because some of us will be more sensitive to it than others.

Non-psychiatric caffeine-associated risks include increased vasoconstriction, heart palpitations, gastric distress and urinary problems. Because caffeine has a diuretic effect, urinary incontinence and related issues may be aggravated by caffeine consumption, especially in the form of coffee. However, new research indicates that our genes play an important role in determining individual risks associated with caffeine.  People who process caffeine at a slower rate, known as “slow metabolizers,” are more susceptible to these risks.

Drinking coffee on an empty stomach (hello, morning coffee drinkers!) can cause discomfort and other digestive upsets. This is because hydrochloric acid is secreted whenever we start to eat food, including coffee. Although this acid is important in digestion, it can damage the stomach lining in the absence of food.

Also, most of us do not take our coffee black; we dress it up with sugar or cream. While the amount of sugar and cream may seem insignificant on a per-cup basis, day after day, cup after cup, it can add up to quite a bit of fat and unnecessary calories.

Moving Away from Coffee and Caffeine

As we have seen, the health benefits of caffeine are quite pronounced. It's no wonder the Ojibwe Indians of the Dakota territories called coffee "Black Medicine," and the great and prolific French writer Honoré de Balzac drank strong black coffee unceasingly during his marathon writing sessions. But maybe you are one of those people adversely affected by coffee's acid or by caffeine's ability to cause a racing heart, headaches or lack of sleep. If so, healthy alternatives exist.

From a pick-me-up and focus standpoint, herbal extracts like ginseng and ginkgo biloba have been shown to help. From the standpoint of long-term health and well-being, supplementing with Ubiquinol, the active, antioxident form of CoQ10, can be effective because it aids in the generation of cellular energy. Ubiquinol also provides other benefits, such as protecting cells from oxidative stress. Whether or not you plan to give up caffeine, a supplement such as Ubiquinol can be a good idea to support cellular energy production and other health beneifts, such as promoting cardiovascular health.

Finally, there is that often overlooked but tremendously important aspect of a healthy lifestyle: pleasure. If that steaming cup of coffee first thing in the morning gets your day off on a pleasurable foot, and you are not experiencing an acidic stomach and heart palpitations, go ahead and indulge—just be mindful of what you're indulging in!

How To Connect With Your Community